The number of companies, which invest in renewable energy, is growing immensely.  It is mostly driven by one key factor – a quite predictable and reasonably short payback period.

However, the targets in this field require substantial investments, and from time to time people are even tempted to take the risk of losing all of their savings with a view to making profit in the long run.

This article dwells upon the smart ways of securing your investments. Insurance has always been the most reliable way to do so. Let us give this issue a closer look to find out about the relevant insurance products.

Equipment supply is often in place at the initial stage of any major construction. There are, however, a great number of perils that the photovoltaic panels, inverters, turbines or other components are exposed to in the course of a shipment.

ICC A cargo insurance policy extended for coverage of loading/unloading operations or interim storage would be the wise choice of insurance product. Optional increase of sum insured by 10 % would allow you to be indemnified for incurred shipment expenses, customs duties etc. as well.

Once the equipment is delivered, it needs to be installed in the construction site. On this stage of investment project the number of risks correlate directly with the type of renewable energy object. For example, solar electric plants are mostly exposed to thefts, floods, hails and windstorms.  Wind power plants suffer from defects in foundation or columns, damage in the course of erection of wind turbine nacelle, contractors’ errors during assembly or utility tie-ins. Small hydro power and biogas plants incur the biggest damages due to the construction and erection errors.

EAR Insurance policy is the most relevant product initially written in Germany. It covers the wide range of various losses suffered in the course of construction or erection works.

Once the object is put into operation and begins to generate energy at green pricing the investor’s headache shifts to ensuring its ongoing operation in order to pay off the cost of construction and repay the loan. 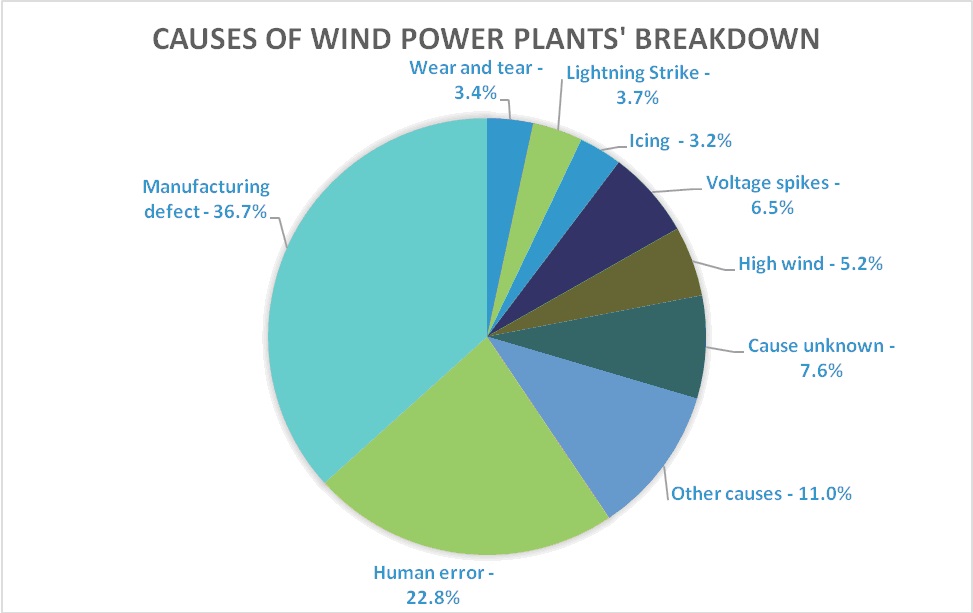 Based on the most popular causes of wind power plants’ breakdown provided by German Fraunhofer Institute and shown in the diagram above we can decipher the major perils and design insurance coverage accordingly.

Property Damage, Machinery Breakdown and Business Interruption Insurance policies are the ones that deserve our attention in this regard.

All Risks property damage insurance which is to cover any damage which is not directly excluded by the policy is considered to be the golden standard for insuring renewable energy objects. Its undisputed advantage lies in the fact that this policy, unlike the Named Perils one, does not contain additional limitation relevant to each particular peril.

Nonetheless, it’s worth mentioning that this policy provides coverage only for the cases of accidental and unforeseen external effects, but excludes the cases related to internal system breakdowns.

For these damages, Machinery Breakdown insurance will do the trick. It is designed to cover the losses caused by human errors, defects during construction, power surges etc.

Western approach to doing business recognizes insurance as the key instrument of securing the assets
Let us take the lightning strike as an example. Property damage insurance policy would guarantee indemnity only in the sum sufficient to replace the part of the insured property, which suffered from direct heat influence. However, machinery breakdown policy would cover consecutive damage caused by induction effect of a lightning strike.

Apart from physical damage, renewable energy plants may suffer loss of profit due to the interrupted operation. They can amount to millions of dollars given the major event. This in turn can lead to the bankruptcy, especially if the lending institution is in the picture as well.

Therefore, we always recommend that the Business Interruption insurance be given a thought when deciding upon the insurance coverage. It is designed to provide indemnity sufficient to cover constant expenses and lost profit for the period of the shutdown. The choice of indemnity period deserves special attention. For instance, one doesn’t need to pay for 12 months coverage if the solar power plant can be rebuilt in 3-4 months.

Finally, it’s worth stressing out that western approach to doing business recognizes insurance as the key instrument of securing the assets. The author could not agree with it more.